Normalizing the level of an incoming signal is a critical step in many wireless communications systems and is necessary before further processing can happen in the receiver. This is particularly necessary in digital modulation schemes which encode information in the signal amplitude (e.g. see LIQUID_MODEM_QAM16 in [ref:section-modem-digital] ). Furthermore, loop filters for tracking carrier and symbol timing are highly sensitive to signal levels and require some degree of amplitude normalization.

liquid implements automatic gain controlling with the agc_xxxt family of objects. The goal is to estimate the gain required to force a signal to have a unity target energy. Operating one sample at a time, the agc object makes an estimate\(\hat{e}\) of the signal energy and updates the internal gain \(g\) , applying it to the input to produce an output with the target energy. The gain estimate is updated by way of an open loop filter whose bandwidth determines the update rate of the AGC.

For received communications signals, however, the goal is to adjust to the gain of the receiver relative to the slowly-varying amplitude of the incoming receiver due to shadowing, path loss, etc. Furthermore, it is impractical to estimate the signal energy of an entire vector for each sample of input. Therefore it is necessary to make an estimate of the signal energy over a short period of time. This is accomplished by computing the average of only the previous \(M\) samples of \(|x|^2\) ; liquid uses an internal buffer size of \(M=16\) samples. Now that the short-time signal energy has been estimated, all that remains is to adjust the gain of the receiver accordingly. liquid implements an open-loop gain control by adjusting the instantaneous gain value to match the estimated signal energy to drive the output level to unity. The loop filter for the gain is a first-order recursive low-pass filter with the transfer function defined as

where \(\alpha \triangleq \sqrt{\omega}\) . In order to achieve a unity target energy, the instantaneous ideal gain is therefore the inverse of the estimated signal level,

where again \(\alpha \triangleq \sqrt{\omega}\) is the smoothing factor of the gain estimate and controls the attack and release time the agc object has on an input signal. Because \(\alpha\) is typically small, the updated internal gain \(g_{k}\) retains most of its previous gain value \(g_{k-1}\) but adds a small portion of its new estimate \(\hat{g}_{k}\) .

The agc object permits the gain to be locked when, for example, the header of a frame has been received. This is useful for effectively switching the AGC on and off during short, burst-mode frame transmissions, particularly when the signal has a high-order digital amplitude-modulation (e.g. 64-QAM) and fluctuations in the AGC could potentially result in symbol errors. When the agc object is locked, the internal gain control is not updated, and the internal gain at the time of locking is applied directly to the output signal, forcing \(g_k = g_{k-1}\) . Locking and unlocking is accomplished with the agc_crcf_lock() and agc_crcf_unlock() methods, respectively.

The agc object contains internal squelch control to allow the receiver the ability to disable signal processing when the signal level is too low. In traditional radio design, the squelch circuit suppressed the output of a receiver when the signal strength would fall below a certain level, primarily used to prevent audio static due to noise when no other operators were transmitting. Having said that, the squelch control in liquid is actually somewhat of a misnomer as it does not actually control the AGC, but rather just monitors the dynamics of the signal level and returns its status to the controlling unit. The squelch control follows six states|enabled, rising edge trigger, signal high, falling edge trigger, signal low, and timeout|as depicted in [ref:fig-agc-squelch] and[ref:tab-agc-squelch-codes] . These states give the user flexibility in programming networks where frames are transmitted in short bursts and the receiver needs to synchronize quickly. The status of the squelch control is retrieved via the agc_crcf_squelch_get_status() method.

The reason for all six states (as opposed to just squelch on'' and squelch off'') are to allow for the AGC to adjust to complex signal dynamics. The default operation for the AGC is to disable the squelch. For example if the AGC squelch control is in signal low'' mode (state 4 ) and the signal increases above the threshold before timeout, the AGC will move back to the signal high'' mode (state 2 ). This is particularly useful for weak signals whose received signal strength is hovering around the squelch threshold; it would be undesirable for the AGC to enable the squelch in the middle of receiving a frame!

The AGC module also allows for an auto-squelch mechanism which attempts to track the signal threshold to the noise floor of the receiver. This is accomplished by monitoring the signal level when squelch is enabled. The auto-squelch mechanism has a 4dB headroom; if the signal level drops below 4dB beneath the squelch threshold, the threshold will be decremented. This is useful for receiving weak signals slightly above the noise floor, particularly when the exact noise floor is not known or varies slightly over time. Auto-squelch is enabled/disabled using the agc_crcf_squelch_enable_auto() and agc_crcf_squelch_disable_auto() methods respectively.

Listed below is the full interface to the agc family of objects. While each method is listed for the agc_crcf object, the same functionality applies to the agc_rrrf object.

Here is a basic example of the agc object in liquid:

A demonstration of the transient response of the agc_crcf type can be found in [ref:fig-agc-transient] in which an input complex sinusoidal pulse is fed into the AGC. Notice the initial overshoot at the output signal. 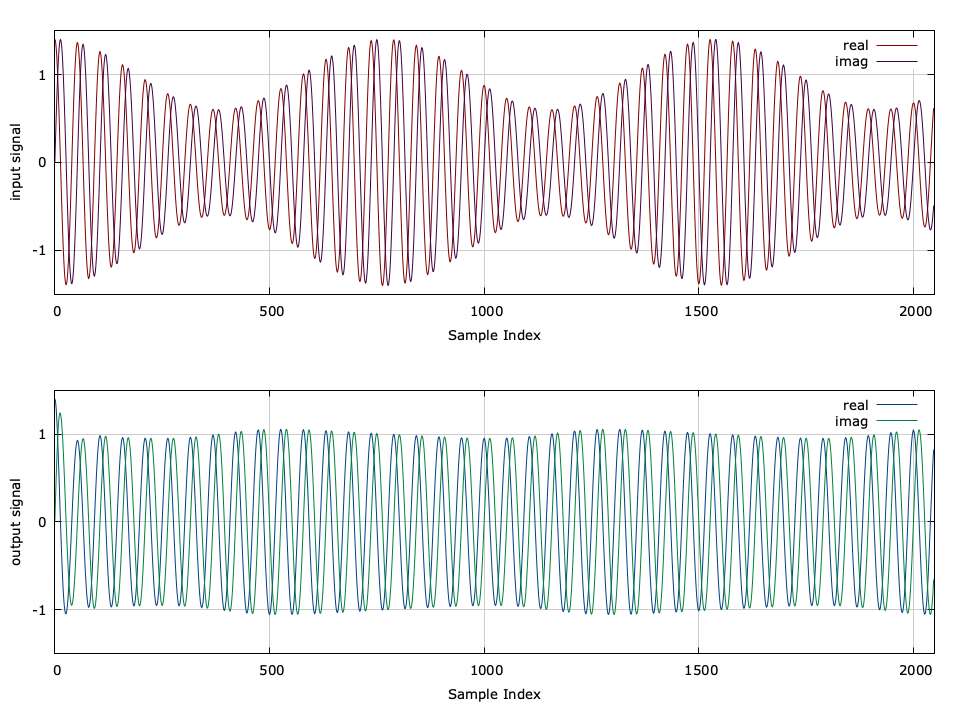 A few more detailed examples can be found in the examples subdirectory.